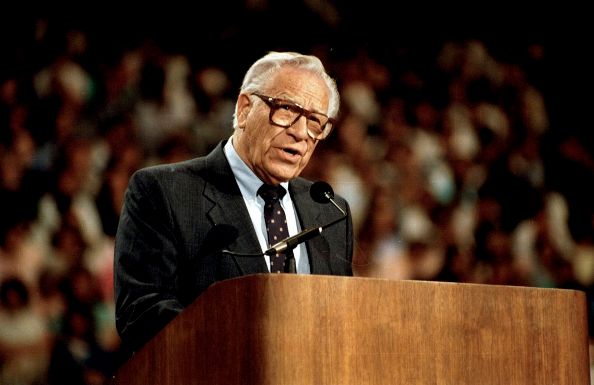 In 1991, the Graham Association created a profile of my life and ministry for airing during one of the crusade telecasts. I was just starting my work for the Lord and I was stunned to learn that my profile would be the second in a series that began with that of baseballer Dave Dravecky.

Graham’s message for that program was entitled “Who Is Jesus?” I can still hear the voice of Cliff Barrows introducing my segment. And, of course, George Beverly Shea’s comforting bass-baritone filled and lifted the hearts of those in the stadium seats at the Meadowlands in New Jersey along with the hearts of those listening from their seats at home.

The Graham Association, in announcing the passing of Mr. Shea, noted that since he first sang for Graham in 1943 on the Chicago radio hymn program, “Songs in the Night,” this dear man had “faithfully carried the Gospel in song to every continent and every state in the Union. Graham’s senior by ten years, Shea devotedly preceded the evangelist in song in nearly every Crusade over the span of more than one-half century.”

Born in Winchester, Ontario, the son of a Wesleyan minister, it was in the choir of his father’s church that he first sang publicly. He went on to perform live before an estimated 200 million people and he recorded more than 70 albums. The New York Times, in a reflection, noted that, “Of the hundreds of songs he sang, Mr. Shea was most closely identified with “How Great Thou Art,” a hymn that became the de facto anthem of Mr. Graham’s ministry.”

Other songs for which he was known include “I’d Rather Have Jesus,” for which he composed the music, and “The Wonder of It All,” for which he wrote words and music. He was the recipient of ten Grammy nominations and a Grammy Award in 1965, and he was presented with a Lifetime Achievement Award by the Grammy organization in 2011. He was a member of the Gospel Music Association Hall of Fame (1978) and was inducted into the Religious Broadcasting Hall of Fame in February 1996. Shea was also inducted into the inaugural class of the Conference of Southern Baptist Evangelists’ “Hall of Faith” in 2008.

George Beverly Shea, 104! What a long and blessed life he led! Cliff Barrows celebrated his 90th birthday earlier this month and Billy Graham’s 95th will arrive in November. I can’t begin to express my gratitude to the Lord for these men. As I sit here reflecting, I realize that – in SO many ways – my life has been what it has been because of what the Lord has done for me and in me through them.

I’ve mentioned the telecast profile but, what is far more important to note, is that I came to faith in Jesus Christ at a Graham Crusade at Nickerson Field in Boston, Massachusetts. Dr. Graham’s signature is on my Master of Divinity diploma from Gordon-Conwell Theological Seminary; he was one of that institution’s founders and chairman of the seminary’s board during my years there. As a student, I was required to train in and engage in evangelism through one of the BGEA phone centers that was activated each time a Crusade aired. Later, I served as a visiting professor in evangelism and urban ministry at Gordon Conwell and required the same training and engagement of my students. I contributed to The Billy Graham Christian Workers’ Handbook and worked with the BGEA on a film for use in the telephone training centers. I was a delegate to Lausanne II (Manila, the Philippines, 1989), one of the series of events called by the Lausanne Movement, which was founded by Billy Graham. I am a Christianity Today Book of the Year honoree and Billy Graham founded that magazine. I was one of the first students invited to participate in the Arrow Leadership Program, founded by Billy Graham’s brother-in-law, Leighton Ford. The list of life intersections goes on and on: I am a product of the Billy Graham Evangelistic Association.

Graham said at Shea’s 100th birthday celebration in February 2009 that he couldn’t have had a ministry without Shea. And I certainly can’t imagine what kind of ministry, if any, I might have had without Billy Graham, George Beverly Shea and others who are and have been part of the wonderful BGEA team. For how many thousands (millions, perhaps?) might this have been so? But, the Lord, in His great providence, called these precious men to His service and we are all the richer for it!

To be “on pitch,” you must follow the correct frequency, you must sing true. From the perspective of many, including this writer, George Beverly Shea lived his life on pitch.

The Wonder of It All

There’s the wonder of sunset at evening,

The wonder as sunrise I see;

But the wonder of wonders that thrills my soul

Is the wonder that God loves me.

Just to think that God loves me.

Just to think that God loves me.

There’s the wonder of springtime and harvest,

The sky, the stars, the sun;

But the wonder of wonders that thrills my soul

Is a wonder that’s only begun.

Thank you, Lord, for the gift of your much-loved George Beverly Shea, whose music has thrilled our souls and reminded us of the wonder of your great love for us all!