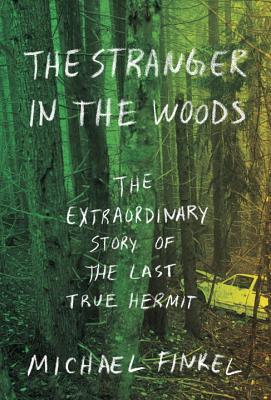 I’ve just finished reading The Stranger in the Woods: The Extraordinary Story of the Last True Hermit. It’s the compelling true story of a twenty-year-old who drove his white 1985 Subaru Brat into central Maine, dropped his keys on the center console, exited the vehicle, started walking without knowing where he was going, and disappeared into the forest. He had a tent and a backpack, but no compass, no map. Christopher Knight, who came to be known as the North Pond Hermit, would remain in the woods for the next 27 years, until he was finally captured by authorities and brought to account for stealing food and other provisions from neighbors who lived not all that far from his well-concealed camp. Never lighting a fire and making sure to obscure every shiny pot, pan, propane tank, and clothespin from the prying eyes of hikers or over-flying aircraft, he managed to survive and his camp remained undetected through the challenges of brutal winters, muddy taiga, and northern mosquitos and blackflies.

Interspersed throughout the tale are reflections on silence and solitude; noisiness and busyness; the restorative power of nature; and the need for or aversion to community. The experiences, shared by author Michael Finkel, of ascetics, solitaries, anchorites, recluses and introverts were illuminating companions to Knight’s story as were the observations from psychologists and biologists who have made a study of the alone ones among us.

In the coming days, I’ll be re-reading and reflecting upon the book, but for now, I’d like to share one passage (of a great many) that I found intriguing:

“In an attempt to gain some empirical understanding of solitude, a cognitive neuroscientist at New York University placed more than twenty Buddhist monks and nuns inside magnetic resonance imaging machines, tracking blood flow to their brains while they meditated. Other neuroscientists conducted similar studies. The results remain preliminary, but it appears that when the human brain experiences a self-consciously chosen silence, as opposed to sleep, the brain does not slow down. It remains as active as ever. What changes is where the brain is functioning.

“Language and hearing are seated in the cerebral cortex, the folded gray matter that covers the first couple of millimeters of the outer brain like wrapping paper. When one experiences silence, absent even reading, the cerebral cortex typically rests. Meanwhile, deeper and more ancient brain structures seem to be activated–the subcortical zones. People who live busy, noisy lives are rarely granted access to these areas. Silence, it appears, is not the opposite of sound. It is another world altogether, literally offering a deeper level of thought, a journey to the bedrock of the self.”