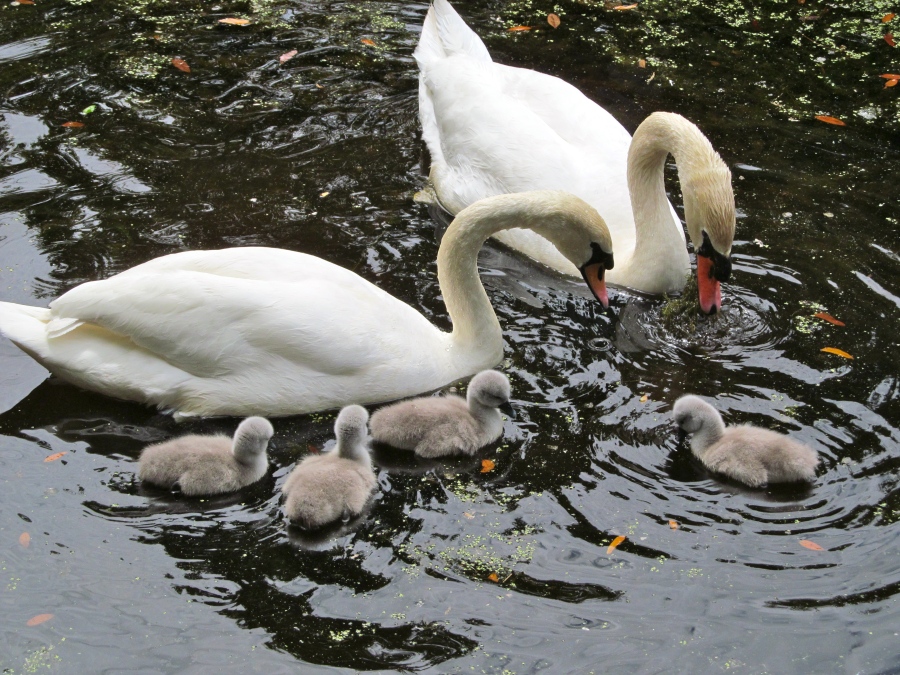 “The swan, like the soul of the poet, by the dull world is ill understood.” — Heinrich Heine

“There’s a double beauty whenever a swan swims on a lake with her double thereon.” — Thomas Hood

Gives out his snowy plumage to the gale;

And arching proud his neck, with oary feet

Protective of his young.” – James Thomson, The Seasons, Spring

The Wild Swans at Coole

The trees are in their autumn beauty,

The woodland paths are dry,

Under the October twilight the water

Upon the brimming water among the stones 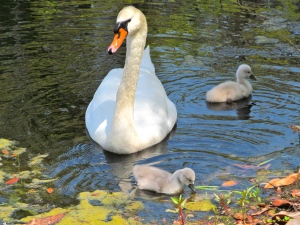 The nineteenth autumn has come upon me

Since I first made my count;

I saw, before I had well finished,

Upon their clamorous wings.

I have looked upon those brilliant creatures,

And now my heart is sore.

All’s changed since I, hearing at twilight,

The first time on this shore,

The bell-beat of their wings above my head,

Trod with a lighter tread.

They paddle in the cold

Companionable streams or climb the air;

Their hearts have not grown old;

Passion or conquest, wander where they will,

Attend upon them still. 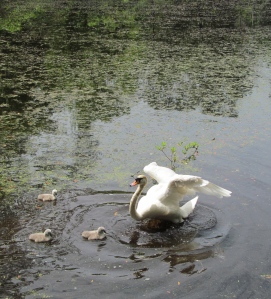 But now they drift on the still water,

Among what rushes will they build,

By what lake’s edge or pool

Delight men’s eyes when I awake some day

To find they have flown away? — William Butler Yeats

All photos by Donna Hailson.

As we are visiting family in North Carolina and had friends visiting from up north, we decided to take a day to tour the battleship that carries our host state’s name. It took us more than three hours to cover the 729 ft. long, 108 ft. beam, six deck vessel that was built at the New York Navy Yard, launched in 1940 and commissioned in 1941.

According to a pamphlet given to visitors on arrival at the ship: “NORTH CAROLINA participated in every major naval offensive in the Pacific during World War II, earning 15 battle stars. She established the role of battleships as protectors of aircraft carriers when she defended carrier ENTERPRISE against air attacks during the Battle of the Eastern Solomons, 24 August 1942.

“NORTH CAROLINA carried out nine shore bombardments, sank an enemy troopship, destroyed at least 24 enemy aircraft and assisted in shooting down many more. Her anti-aircraft guns helped halt or frustrate scores of attacks on aircraft carriers. One of her Kingfisher pilots performed heroically during the strike on Truk when he rescued ten downed Navy aviators on 30 April 1944.

“She steamed over 300,000 miles. Although Japanese radio announcements claimed six times that NORTH CAROLINA had been sunk, she survived many close calls, near misses and one hit when a Japanese torpedo slammed into the battleship’s hull on 15 September 1942.

By war’s end, she lost only ten men in action and had 67 wounded. After the war, the ship served as a training vessel for midshipmen. She was decommissioned 27 June 1947 and placed in the Inactive Reserve Fleet in Bayonne, New Jersey.

When the US Navy announced its intentions to scrap NORTH CAROLINA in 1960, the state’s citizens mounted a brief successful campaign to bring the battleship to North Carolina to preserve her as the state’s premier war memorial and a tourist destination. The ship opened to the public in 1961. NORTH CAROLINA is an authentically restored World War II battleship, a National Historic Landmark and a memorial honoring the 10,000 North Carolinians of all branches of the service who gave their lives in World War II.”

In a room carrying the photos and memories shared by those who served on the battleship, is a Roll of Honor that: “perpetuates the memory of the ten thousand North Carolinians of all the United States Military Services who died in World War II. Not for fame or reward, not for place or for rank, not lured by ambition or goaded by necessity, but in simple obedience to duty, as they understood it, these men suffered all, sacrificed all, dared all, and died.”

Church services were usually held in the mess hall, but they could also be set in any other available compartment or on the main deck. The congregation often included crews from smaller ships, such as destroyers, that did not have a chaplain. During a Christian service, a church pennant (with a blue cross) flew above the American flag. It was the only flag authorized to do so. On Sundays, Protestant services were at 10 AM. Communion was held quarterly. In the spring of 1944, a Catholic priest was assigned to the battleship. Before then, mass was held when a visiting priest came aboard. Mass was held at 8:30 AM with confessions heard at 7:30 AM.

The USS NORTH CAROLINA had nine captains in six years. They all graduated from the United States Naval Academy in Annapolis, Maryland. Commanding the NORTH CAROLINA was a prestigious position and a steppingstone to admiral for all of her captains. All but one was promoted to admiral immediately upon leaving the ship; the last was promoted later.

The many items for personal use placed alongside postings of crew memories help visitors imagine the daily life of the ship’s crew in the Pacific Theatre during World War II.

The Dentist’s Office, with x-rays, cotton balls, tongue depressors, medicine vials, dental instruments and clipboards with notes in view appear to be awaiting the arrival of a patient. The Operating Room – complete with autoclave, linens and surgical instruments – stands waiting as well. In the Cobbler’s Shop, we find shoes on a shelf perhaps ready to be resoled. In the Tailor’s Shop, we learn that most services – alterations, repairs, pressing and cleaning – were free and that any money collected went to the ship’s welfare and recreation fund.

We come upon the laboratory equipped with a microscope and find a ship’s store stocked with toiletries (Dr. Lyon’s Tooth Powder, Lifebuoy Soap, Listerine Mouthwash) and smokes (Bull Durham and Velvet Tobacco, Chesterfield and Lucky Strike Cigarettes, Tampa Nuggets Cigars). Mail is in the slots ready for pick up at the Post Office. The altar and pulpit in the Mess Hall are dressed and ready for use.

Mattresses are placed on the cots in the berthing quarters and one begins to ponder what a task it must have been to get to the uppermost bunk scrambling over the guys in the three bunks below you. More cots are found in many of the shops indicating that some crewmembers slept in the areas to which they were assigned. A guide informs us that a man in one of these shops might also have had duty as a lookout several decks above.

On the ship’s new online Sea Stories blog (http://www.seastories.battleshipnc.com), I read that, when it was time for a trim, “each guy carried a round disk to the barber shop which meant he was authorized by the division to get a haircut. When he came back he was told to hand it to somebody else the division Petty Officer thought needed a haircut.”

On that blog as well, I learned that chaplains were among the first to introduce libraries to ships.

I enjoyed the education I received in the origins of Navy terminology. Two of my favorites: “scuttlebutt” and “old goat.”

Drinking fountains on board ship are called “scuttlebutts,” Navy parlance for gossip or rumors. I did some further research and discovered the term comes from a combination of “scuttle” – to make a hole in the ship’s hull thereby causing her to sink – and “butt” – a cask or hogshead used in the days of wooden ships to hold drinking water. The cask from which the ship’s crew took their drinking water – like a water fountain – was the “scuttlebutt”. Even in today’s Navy a drinking fountain is referred to as such. Since the crew would congregate around the scuttlebutt, that is where the rumors about the ship or voyage would begin. Thus, then and now, rumors are talk from the scuttlebutt or just scuttlebutt. Visit

http://www.navy.mil/navydata/traditions/html/navyterm.html to learn more about the origins of expressions such as “between the devil and the deep blue sea,” “chewing the fat,” “cup of joe,” “feeling blue,” “taken aback,” “giving no quarter,” “three sheets to the wind,” “hunky-dory” and “wallop.”

On a visit to the Chief Petty Officers’ Quarters – the “Goat Locker” – I learned that Chiefs are referred to as “goats” or “old goats.” The origins of the nickname are fuzzy but one story shared by Daniel D. Smith, Chief Petty Officer, USNR (Ret.) goes like this: “In the days of sailing ships, ships carried livestock to provide the crew with fresh milk, meat and eggs. These animals would also serve as pets and mascots. The USS New York had a goat as a mascot and his name was El Cid, meaning, “The Chief.” They took El Cid to the fourth Army-Navy football game in 1893 in Philadelphia. When Navy defeated Army, the Navy decided that El Cid brought good luck. They offered the goat shore duty at Annapolis and he became the Navy’s official mascot. Since El Cid, “The Chief,” was a goat, then chiefs became known as goats.”

A visit to the “head” brought home the expression “rank has its privileges.” “Head”, by the way, is Navy parlance for the bathroom. The term comes from the days of sailing ships when the place for the crew to relieve themselves was all the way forward on either side of the bowsprit, the integral part of the hull to which the figurehead was fastened. On board, the NORTH CAROLINA, enlisted men used the “General Bathroom”, with its trough, while the Chief Petty Officers had private stalls with flush toilets.

On the day of our visit, a crew was resurfacing the ship’s main deck. Everywhere we looked, from the head to the bridge, from the engine room to the Kingfisher and its crane, the loving, meticulous attention to detail of those who are curating and caring for this magnificent treasure is evident. The Battleship NORTH CAROLINA is a must-see in Wilmington.

The featured image at the top of this page is of the Battleship North Carolina as seen from across the Cape Fear River at the Wilmington Riverwalk. Click on the first photo below to enter the gallery and view the enlargements. All photos by Donna Hailson.